Shiatsu is Japanese for “finger pressure.”  Now practiced all around the world, it is a version of what may be the oldest form of therapy known to man: healing by touch.
About 500 AD, an ancient Chinese manual treatment called “Anma” was introduced to Japan, where it was further developed and, over centuries, became what we now call shiatsu. The word shiatsu was first used in the beginning of the Twentieth Century by T. Tempaku in his book Shiatsu Ho.

The founder of Zen Shiatsu, Shizuto Masunaga (1925-1981), melded traditions of classical shiatsu with Chinese medicine and Western psychology.
At the same time as he refined ages-old shiatsu methods of diagnosis.  He named his system Zen Shiatsu to express the kinship between his approach and the simple and direct spirituality of Zen Buddhist monks in Japan.

Like acupuncture, shiatsu is part of Oriental medicine and is based on its meridian system, the network of energy lines that supports the entire body. Life energy, called 'ki,' flows along the meridians, stimulating and harmonizing all bodily functions.  If the stream of ki is blocked or out of balance, we feel tension, organ function is impaired, and we become fatigued.  If not addressed, this can lead to sickness, including the problems listed in  Treatments.
In shiatsu therapy, blockages in the meridian system are found, diagnosed and treated. Specific health issues are relieved and general well-being enhanced. 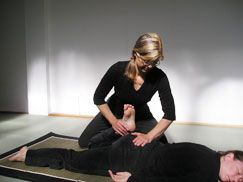